Skip to the content
Did you notice my “deliberate mistake” in the first draft of the previous blog? As I typed “wrist loop” something nagged me to use another term, but “martingale” is rather obscure these days, certain dictionaries no longer acknowledging it.
For a weapon such as a baton a wrist loop should never be used on the wrist! If it is and the baton is grabbed by an aggressor you will find yourself undesirably under their control.
The correct way to retain a baton is to use the loop as a thumb loop. Hook it over your thumb, let the thong go around the back of the hand then grasp the grip. If the baton is seized you can just open your hand and let the loop slip off your thumb. Counter attack before the aggressor realizes you have let go.
Most batons you will encounter will have the thong mounted at the butt of the baton. The FBI Baton Manual (which is well worth a read, btw) recommends the thong is mounted above the grip and is about twice as long as you might expect is needed. Once again, the thumb is used. With this thong you have two options. The first is to let the thong hang down the back of the hand and then grasp the grip. This is effectively the same as the method already mentioned for a base mounted thong. The second method is to first let the thong hand down your palm, then take it up the back of the hand and pass the grip over the top of the hand and into the palm. 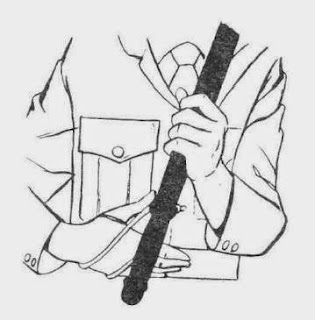 All of these methods wrap the thong securely around your hand but allow the weapon to be rapidly released if grasped. Those of you that brought my book on Survival Weapons will be familiar with the illustration below. This shows the same methods being used for a machete. Having a machete fly out of your hand when you hit a resilient piece of wood can make you unpopular so a thong is recommended! A long thong on a baton has other applications. Below is an illustration of a restraint. Both of the suspect’s hands are passed through the loop and it is then twisted and rolled around the baton to tighten it. A second way to use the loop is taken from Fairbairn’s “Get Tough”. The suspect does not have multiple arms! This shows the thong being tightened around the wrists of several prisoners so that they may be led.