Skip to the content
There are a number of topics I intend to cover in the near future. The starting point for many of them begins with Horace Kephart, so it is prudent to begin with looking at some of his recommendations for outfitting. Here is his list of clothing and equipment for summertime trips in the North American woods. This particular version was taken from the 1957 reprint of the 1921 edition of “Camping and Woodcraft”. My 1927 edition has an identical list. My comments and clarifications and in green. Quotes from Kephart in khaki.
SUMMER EQUIPMENT FOR BACK-PACKING WEAR
“With such an outfit and his gun or fishing tackle, camera, or whatever may be the tools of his outdoor hobby, anyone of average physique and a little gumption can fare very well in the open, and enjoy absolute independence.”
Woolen gauze undershirt.
Hard to find at a reasonable price, nowadays! Key features are its permeability and ability to dry easily. A clothing system needs to build from the inside out. Modern alternatives may be string vests, mesh synthetics and soft microfibre garments such as Coolmax tee-shirts. In winter Kephart recommends wearing two sets of medium-weight woolen underwear rather than one heavy set.
Woolen gauze (or balbriggan) drawers.
Kephart notes that the legs sweat less than the torso so in warm weather drawers of open-weave ribbed cotton are a viable alternative to woolen gauze. Cotton drawers are easier to wash in the field. If cold conditions or lots of wading is expected drawers should be wool. Drawers should be long legged to protect the knees and legs from scrapes and bumps.
Woolen socks, winter weight, natural color.
These can be safety-pinned to the bottom of the drawers to keep them up, if necessary.
Army overshirt, olive drab chambray (or flannel).
“Flannel” is an ambiguous term but I think in this context he means woolen flannel, both woolen flannel and cotton chambray being suitable for summer overshirts, but it could mean cotton flannel too. There is some mention of chambray being better than “khaki” shirts, which may refer to the army issue item of cotton. The US Army of this period issued both woolen and cotton garments. “Khaki” often refers to the cotton version, the woolen being described as “olive”. Elsewhere Kephart suggests when the weather gets cooler an officer's woolen shirt be used instead of the chambray. 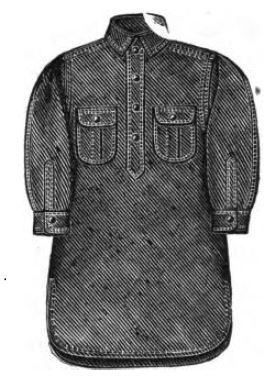 Shown is an illustration from the 1907 Abercrombie and Fitch catalogue. This is likely to be the sort of shirt Kephart wore. It is a head-over design and long enough to be a serviceable nightshirt. Incidentally, this catalogue defines “khaki” as being a closely woven cotton twill.
Silk neckerchief, 27 x 27 in.
Khaki trousers, extra suspender buttons.
Kephart notes that cotton trousers survive the woods better than woolen. His preference is for “genuine English moleskin” cotton. Wool trousers have advantages where the weather is very wet or much wading is done. Army trousers of “olive-tan wool” are acceptable but he considers woolen “kersey” better. Notable is Kephart always uses the term “trousers”, never “pants”. Elsewhere he suggest trousers can be cut off six inches below the knee.
Invisible suspenders.
Kephart notes these are hard on buttons, hence the spares suggested above.
Leather belt, narrow.
Army shoes, cone-headed Hungarian nails.
Army leggings, canvas.
Among their many merits, provide some protection from snake bite.
Felt hat, medium brim, ventilated, felt sweat-band.
A felt sweat-band is preferred to leather since it is permeable and quick drying.
IN POCKETS
Left shirt—Map sections, in cover. Leaf of almanac. Note book and pencil.
The map case he favours has six transparent pockets, each of which can hold two sections of a US Geological Survey map, back to back. Note book should be quadrille ruled for mapping and drawing to scale, which is a valid suggestion even today.
“Take along an almanac to regulate the watch, show the moon's changes (tides, if near the coast), and, by them, to determine the day of the month and week, which one is very apt to forget when he is away from civilization. Have a time-table of the railroad that you expect to return by.”
Right shirt.—Compass.
“I wear the instrument in a small pocket sewed on my shirt for that purpose, so it fits, and attach it to a button-hole by a short, strong cord. A long cord would catch in brush. If the compass is carried in a large pocket it will flop out when you stoop over or fall down.”
Left trousers.—Purse. Waterproof match box, flat pattern (as reserve).
Kephart was a pipe smoker. These matches were for emergencies, the supply on his belt being used for his pipe.
Right trousers.—Pocket knife.
“The jackknife has one stout blade equal to whittling seasoned hickory, and two small blades, of which one is ground thin for such surgery as you may have to perform”
Fob.—Watch. Left hip.—Pipe. Tobacco.
Right hip.—Bandanna handkerchief.
ON BELT
Right side, front.—Waterproofed matches (50) in leather belt-pocket.
Right side, rear.—Sheath knife.
Blade of less than five inches. Kephart carried a tomahawk, hatchet or axe, so did not feel the need for a larger knife.
Further on, Kephart says that if part of a group it is useful for each member to carry a whistle, and have an agreed code of signals. ON BACK
Duluth pack sack, 24 x 26 in. . . 2 lbs 4 oz.
Shelter cloth, 7 x 9 ft., waterproof. . . 2 lbs 4 oz.
No support poles are carried. The surrounding woods and the tomahawk met these needs. Unlike many modern campers, Kephart expected to have a camp fire to sleep before. At high altitudes a closed tent (3½-4 lbs) and warmer bedding might be required.
Mosquito net, 68 x 72 in . . 4 oz.
U. S. A, [US Army] blanket, summer weight, 66 x 84 in, . . 3 lbs
Browse bag, 32 x 78 in . . 1 lbs.
The browse bag was a sack that could be filled with foliage, straw or other soft materials to serve as a mattress.
Pillow bag, 20 x 30 in . . 3 oz.
A smaller version of the browse bag, to serve as a pillow.
Rubber cape, 34 in . . 1 lbs 5 oz.
Designed to reach to the knee. Used as protection against the wind as well as the rain.
“A cape has the merits of a poncho, in that it is airy underneath, and it can be slipped on over the pack-sack, while it has the advantage of leaving your arms free to fend off bushes, to climb with, to shoot, paddle, and so on.”
Stag shirt . . 1 lbs 8 oz.
The “stag shirt” Kephart uses is made of “Mackinaw”, a strong woolen cloth. The 1907 Abercrombie and Fitch catalogue describes the Mackinaw cloth it uses as 40 oz. The shirt is used instead of a coat or jacket and may be used as a sleeping garment or in combination with the cape. Modern Mackinaw garments are very expensive, and often only available in red check patterns rather than the more discrete grey Kephart favoured. Fleece jackets are a potential alternative, but many of these are insufficiently windproof so will need to be combined with a robust shirt or hoodie worn over them.
Spare suit underwear and socks, as above . . 1 lbs 2 oz.
Tomahawk, muzzled . . 12 oz.
“The knife never was made that will compare with a good tomahawk.” ( I doubt Kephart ever encountered a kukri!)
The tomahawk or similar provided both firewood and shelter. “Among my most valued possessions is a tiny Colclesser tomahawk, of 8-ounce head and 2½ inch bitt, which, with hickory handle and home-made sheath, weighs only three-quarters of a pound. I seldom go anywhere in the woods (unless in marching order with a heavier axe) without this little trick.
It is all that is needed to put up a satisfactory shelter wherever there is hemlock or balsam, or bark that will peel, while for other service I use it oftener than I do my jackknife.”
Side-cutting pliers, 5 in, . . 4 oz.
There is some speculation that if Kephart was around today he might have carried a multi-tool. I suspect he might have been quite bemused by examples that weigh half a pound or more!
Carborundum whetstone, 4 x 1 x ½ in . . 2 oz.
Wallet fitted with small scissors, needles, sail needle, awl point, 2 waxed ends, thread on card, sail twine, buttons, safety pins, horse-blanket pins, 2 short rigged fish lines, spare hooks, minnow hooks with half barb filed off, sinkers, snare wire, rubber bands, shoe laces . . 6 oz.
A combination of sewing kit, repair kit and emergency fishing and snaring kit.
Strong twine in bag . . 1 oz. 2 Aluminum buckets (1 qt.), in bag . . 14 oz.
See my blog here for more information on these.
Tin cup, seamless (1 pt.) . . 3 oz.
Oddly the list does not include a water bottle, although elsewhere Kephart tells us:
“One may travel where water is hard to find, though this seldom is the case in a timbered region. The best canteen is one of aluminum which neither leaks nor rusts like the old-fashioned tin affairs. [Aluminum will be corroded by copper ions. Copper ions are present in most tap water.] It should have a canvas cover with felt lining. When the felt is wet its moisture cools the water in the canteen bv evaporation. The canvas cover prevents too rapid evaporation, and keeps the canteen from wetting one's clothing. At night or in case of illness, the thing can be used as a hot-water bottle, the insulation keeping the water hot for a considerable time. The best pattern is the present regulation army canteen, which is shaped like a flat flask, but with one side rounded a little and the other concaved to fit the body. It has a flat bottom, so you can stand it up. The aluminum screw-cap, held by a chain, cannot jolt out like the corks of common canteens.”
Nails and tacks . . 3 oz.
Used to create camp furniture or assist in shelter construction. Kephart tells us these are only needed if expecting to stay several days in one place. Half a dozen each of 6d (2") and 3d (1¼") wire nails, and some galvanized tacks.
Cheesecloth, 1 yd . . 1 oz.
Used to carry fish or hang meat. Also used for straining. Could be used to create a head net against insects.
“…substitute for a tea-ball.”
Fly dope, in pocket oiler . . 2 oz.
Fly dope was insect repellent.
Talcum powder, in wpf. bag . . 1 oz.
For care of the feet.
Comb, tooth brush, tiny mirror, bit of soap in wpf. bag, rolled in small towel secured by rubber bands . . 6 oz.
Toilet paper . . 1 oz.
First aid kit . . 5 oz.
Spare matches, in tin box secured by adhesive plaster . . 2 oz.
Electric flasher, flat, round corners . . 5 oz.