Skip to the content
A few nights ago I stayed up late, and by the time I went to bed it was very cold indeed. So cold, that as I lay waiting for my shivering to warm the bed, I considered fetching a woolly hat. I thought about the nightcaps worn by characters such as Scrooge and reflected that some of our ancestors ideas were wiser than we treat them. This got me thinking about ancient clothing styles again. For a big chunk of their history humans wore cloaks and tunics, and there is no obvious logical explanation of why this has declined. Indeed, I am old enough to remember nurses and policemen wearing capes as outdoor wear.
Most modern people spend much of their time indoors. Features such as central heating, air-conditioning and insulation make this a very comfortable environment. Most of us wear just a shirt or tee-shirt, our modern underwear barely qualifying as a layer. In some places a jacket and tie is required, and cooling is turned up to a higher level, wasting energy. (Remember, the cloth used to make one ugly neck tie could be used to make two Brazilian bikinis!). When we leave this protective environment we need more insulation, and this usually takes the form of a thick outer garment we can easily remove in one piece when we reach the indoors again.
For our ancestors, things were different. Uniformly heating a large structure was problematic and resource intensive. Ironically, the peasant in his little hut would be better off in this respect than the lord in his vast castle or manor. I imagine certain select chambers of a castle had fires or braziers while the corridors and other chambers might be cold enough to fog the breath.
In general there would be less discrepancy between interior and exterior temperatures. Hence the typical clothing ensemble was orientated towards being comfortable outdoors. Travellers or soldiers might have to spend several days at a time out of doors. For the Celt, Roman, Viking, Saxon or Norman the answer to this was the cloak and tunic. These were made of wool, which has the merit of retaining some warmth if soaked by the rain. Some woollen garments had the lanolin left in or added, and might have a nap that shed rain and snow. Other fabrics such as linen and hemp saw some use, particularly in drier climates, but generally the cloak and the outermost tunic would be woollen. The early Roman tunic lacked true sleeves, or was short sleeved. Many Romans went bare-legged, or wore short breeches. In latter centuries the Roman soldier wore long sleeves and trousers, much like his earlier Germanic foes. (By this time many legionaries were of Germanic ancestry).
Tunic, trousers and cloak were not the whole story. Except in hot conditions, some form of short or undertunic may have been used. These might have been of easily laundered cloth such as hemp and linen. Underpants were rare or unknown in some cultures or classes. A noble may wear braies, while the poorer medieval man tucked the long tails of his shirt between his legs. In an era where many people could not afford large quantities of clothing such a shirt might also serve as a night shirt. Roman attire included a long scarf, worn under the tunic. For the soldier this prevent armour chaffing his neck, but the scarf is recorded as being a general item of wear. In addition to its other functions, such a scarf may have served like a detachable collar, protecting the tunic and other garments from soiling. Many tunics show trimming of the neck, cuffs and hem. This is often contrasting or decorated. Easily replaced, this may have allowed the practical life of a garment to be extended, an important consideration when many individuals owned only a few garments. 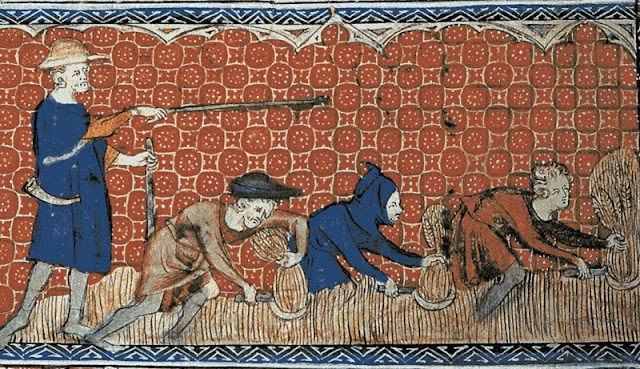 If we look at medieval peasants and other commoners a very common item of clothing is the hood. A modern hood is usually part of a larger garment, and hooded cloaks date back thousands of years. What is distinctive about these medieval hoods is they are separate garments. Initially I thought this might be some prudent frugality. If a tunic wore out you could still make use of a perfectly good hood. Also, one only need buy or make a single hood that could be used with any of your garments. Some of this may have been the case, but the following video provided further enlightenment:
The hood was as much a shoulder cape as it was a head covering. The hood was usually lined, so it provided an extra couple of layers of insulation over the part of the body heat would be rising from.
Further on the video explains how in warmer conditions the hood can be configured into a chaperon-style hat. 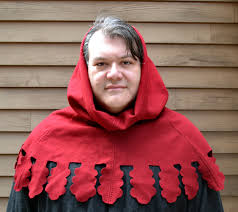 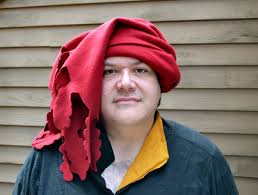 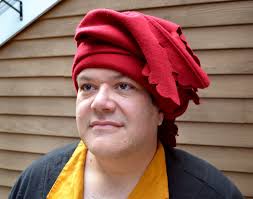 Elsewhere in this blog I have described how a shoulder covering can contribute to personal camouflage. A garment based on the medieval hood could have “garnish” applied as described here. A shaped hem adds further disruption. Camouflage cloth could be used, but this will work with any suitably neutral-coloured monotone. Being a lined garment it could be turned inside out to hide the camouflage if necessary. If made with camouflage cloth at least one side will need to cotton, so perhaps it should be made with a layer of fleece sandwiched between two layers. Some of the hoods sold for re-enactors are reasonably priced, but choice in good tactical colours is limited. Do not overlook the potential of modern versions, such as a section of poncho-liner, possibly combined with the M-51 hood attachment.
Worn as a chaperon, the hood is suitably irregular to still work as camouflage. At a distance, it looks a bit like a turban, which may be useful. One is reminded of the Mitznefet used by the Israelis.
Much to my surprise, the medieval hood has considerable potential for modern use by anyone who ventures out in cold weather.